skip to main | skip to sidebar

Ever since recently acquiring a copy of Nigella's 'Forever Summer' on DVD and watching her make strawberry ice cream, I have been wanting to make some myself, which is funny, as I don't even like strawberry ice cream.  Perhaps I should clarify, I don't like commercial strawberry ice cream, or strawberry flavoured milk, or any of those artificially flavoured products.  To me they are overly sweet, and taste nothing like real strawberries.  So it was the possibility of making an ice cream that actually tasted like fresh strawberries that appealed to me.  I decided however not to go with Nigella's recipe, simply because it used 10 egg yolks (to 1L of milk and cream), and instead found a recipe that uses 5 yolks (to 750ml of milk and cream).  This recipe is from 'Iced' (edited by Katri Hilden and Emma Hutchinson).

The recipe calls for the pureed strawberries to be sieved to remove the seeds (as did quite a few of the recipes I found before settling on this one).  I don't really understand why.  To me, strawberry seeds are pretty inoffensive, and so what is the point of removing them?  To make your homemade strawberry ice cream look more like a commercially prepared one?  To remove the evidence that it had in fact been made from actual fruit?  Nonetheless, I attempted to comply, even though I was pretty certain my finest strainer would not be fine enough to remove strawberry seeds.  I was right - strawberry seeds were going through, and all it was really doing was holding back some of the pulp which would be needed for flavour, so I gave up and just put all the strawberry puree in, unsieved.

The flavour of this was really nice, and hooray - did actually taste of real strawberries!  My husband said it was like eating fresh strawberries and cream, but in frozen form.  The only thing I would say though, is it is not the creamiest ice cream I have ever eaten.  Having been churned in the ice cream machine, it wasn't icy either, just not as creamy as I would have liked.  I think this is partly my own fault.  The custard uses half cream, half milk, and all I had to hand, indeed all I ever have to hand, is low fat and skim milk.  So I used low fat, and normally this doesn't seem to detract from the finished product too much.  In this case though, I think it did, and I think it is because of the combination of the lower fat milk, plus the volume of strawberries once frozen is obviously going to add more iciness than creaminess to the finished product, so therefore perhaps needs a creamier base custard to counterbalance.  All the recipes I've found similarly use half milk, half cream, so perhaps merely using full fat milk would have made a difference.  I will have to try it next time and see, or else increase the proportion of cream to milk.  Nigella's recipe with the 10 egg yolks would make for a thicker custard, which would help the creaminess, but then it also contains twice as much strawberries.  I think it does also help if one is patient and does let the ice cream soften a little before hoeing in!  In any case, this cooking experience has redeemed strawberry ice cream for me, which I previously avoided (except in those curiously compelling strawberry sundaes sold at the Ekka - Brisbane's yearly show).

Heat the milk, cream and sugar together in a saucepan over medium heat, stirring constantly, until the sugar has dissolved and the milk is nearly at boiling point (but do not allow to come to the boil).  Remove from heat.

Whisk the egg yolks together and then add 1/4 of a cup of the milk mixture and whisk to combine.  Whisk in the remaining milk mixture, then tip back into the saucepan.  Stir constantly over medium-low heat until the mixture has thickened sufficiently to coat the back of a spoon.  One way to test if the custard is ready, is to dip the spoon into the custard, pull it out of the mixture, and using your finger, draw a line through the mixture on the back of the spoon.  If the mixture is thick enough that the two halves remain separate, then the custard is ready.  If the mixture runs off the spoon, or the two halves run together, return the pan to the heat and keep stirring and retest in another couple of minutes.  Do not allow the mixture to boil.  Once ready, tip the custard into a container, cover the surface with cling film (this prevents the surface of the custard from forming a skin), allow to cool slightly, and then place in the fridge to chill completely.

Stir the pureed strawberries into the chilled custard and churn in an ice cream machine.  Otherwise, transfer the mixture to shallow metal trays and freeze, whisking every few hours to break up the forming ice crystals until the mix is frozen and smooth.  Freeze for 5 hours or overnight.  Allow to soften in the fridge for 30 minutes before serving. 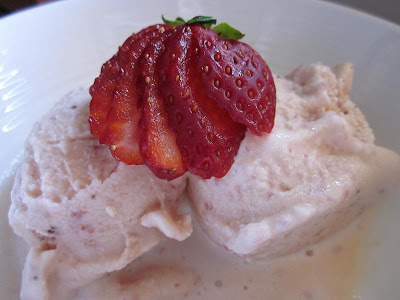 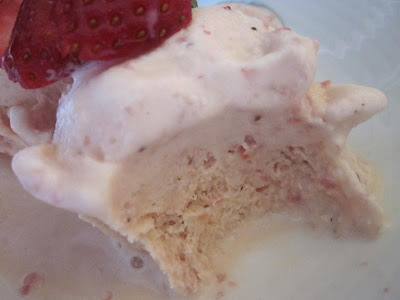